The diodes on the main rectifier assembly can be checked with a multimeter. The flexible leads connected to each diode should be disconnected at the terminal end, and the forward and reverse resistance checked. (See section 2, diode testing).  The rectifier assembly is split into two plates, positive and negative, and the main rotor is connected across these plates.  Each plate carries 3 diodes, the negative plate carries the negative based diodes, and the positive plate carries the
positive based diodes.  Care must be taken to ensure that three identical polarity diodes are fitted to each plate. When fitting the diodes to the plates they must be tight enough to ensure a good mechanical and electrical contact, but should not be over tightened.  The recommended torque tightening is 4.06 to 4.74 Nm, (14 to 17 kg/cm). 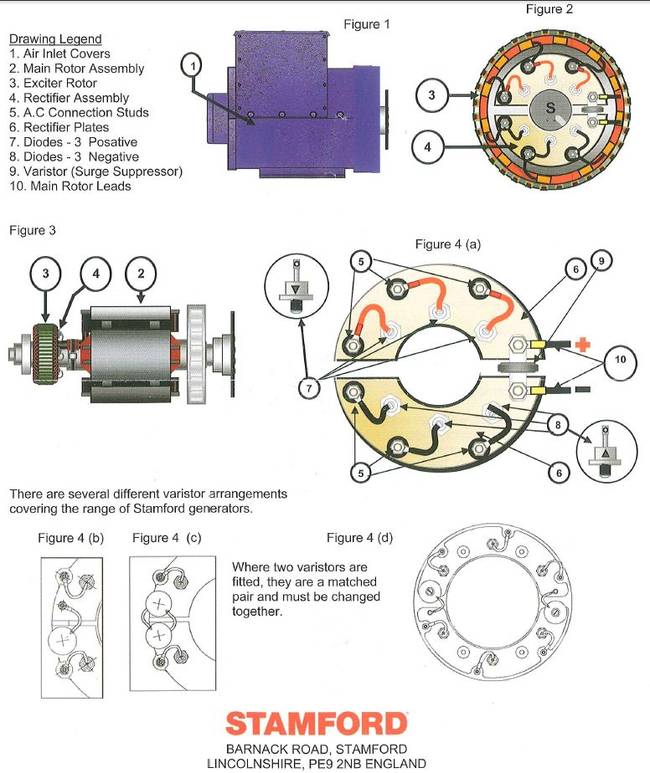 The Surge Suppressor can be tested with a Multimeter on Megohms range.  A good Surge Suppressor should have a very high resistance, (more than 100 Megohms in either direction).  A faulty Surge Suppressor will be either open circuit (usually showing signs of burning) or short circuit in both  directions.
The Main Rectifier will work normally with this device removed.  However, it should be replaced as soon as possible, to avoid diode failure in the event of further transient fault conditions.   Occasionally, a very high transient may totally destroy the Surge Suppressor. This would result from extreme fault  conditions, such as lightning, (electric storms), close to overhead distribution lines, or out of phase synchronisation of the Generator, when paralleled to multiple Generator systems, (or the Mains, Utility, supply).

In the event of a Surge Suppressor failure, all rectifier diodes should be replaced, including any which appear to test OK.